This square is situated in the centre of La Rambla. The so called ” Plaza de España ” or ” El paseo”, is one of most important places in the city where many bars are located. The owners of these bars set their tables on Saturdays and Sundays and the people can drink while they are enjoying the fantastic whether in Spring. Children enjoy playing due to the large surface available. In addition, some concerts and festivals take place.

This square was created in the year 1865. It has had several names along the history as “Paseo del Ángell “, called this way until ends of the 19th century. This later became known as ” Paseo del Marqués de Viana. ” In the Second Republic returned to be renamed as ‘’ Paseo de Alejandro Lerroux ”, in honour of the chairman of the Republican government that was born in this city. Besides these, this place has been identified by other names.

The best time of ‘’El Paseo’’  was the 60s. The fact that a lot of families didn’t have to emigrate to other regions or abroad.

The customs have changed a lot, so ‘’El paseo’’  is not what it once was, although, as we said before, thanks to the terraces of the bars and restaurants surrounding it, has been recovering interest. 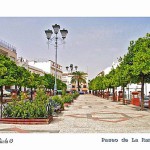