The “Arroyazo Park” is situated in the middle of La Rambla, near the Town Hall, the Court, the Police Station and other public buildings.

The main access is through Ancha Street and it has a little path at the end of the park which connects the park with the street and the San Sebastian road.

Until the 80’s this area was used like a dumping site; it completed the slopes that existed and it canalised the stream where the flooding rain was, this is the reason of the name of the park.

The two-ways central street was built in 1987 and it’s separated by a huge central reservation which has trees and benchs and a great viewpoint. Later they added a football-basketball court, a playground and a parking.

In 90’s it was built an emergency landing area for helicopters which will be supplanted for a second-one in a better space in the near future.

During the last years it has been built some terraces on the bank that is behind the viewpoint and it has taken advantage to plant a big number of trees and shrubs, and it has also being used to create small jogging route. 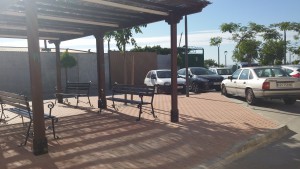