From the time that Constantino magno conceded the peace to the Church it was adopted  the habit to bury to the congregation in earthen sepulturas inside the same temple and later in crypts or vaults built on purpose.Only when the population suffered epidemics,they had a determination to put sign in the place  where the graves were, but when it finished  the epidemic , they returned to the same mechanism of the burials in the temples.

In  La Rambla a lot of churches and hermitages existed , the greatest part of the wealthy families had own burials in them. Several doctor thought that this epidemic had to do with the Errillas or the orchard of the valley , both pieces of land had its adherent terrains.

The Errilas : they founded  hygienic reasons.

Orchard of the Valley:  reasons of economy

They alleged about the first land that the place of the Errillas was situated north as it was stipulated by the government, and due to stirring up the terrains of the orchard of the valley that had served for the epidemics of 1804 , 1834, it could originate a new infection. 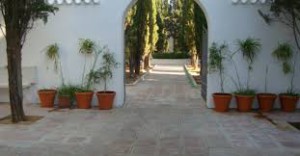 The second it was found  that to create the cemetery  in the Errillas it was necessary to do also a road for the same, build a hermitage, clean the terrain…the budget was about 14.000 and real beak, and situating it in the valley was much more economic for having built the hermitage and the greater part of the walls and ways.On 21 July, 1843, the cemetery remained opened, a chapel, the ancient hermitage of the valley , and remaining his administration in charge of the municipality of La Rambla.