The hermitage of Santa Ana (La Rambla, Córdoba) was a place of prayer, dating from the Century XVII, consisted of very small dimensions, where the population of that time I could go and pray.

The size that this was characterized by a very small size, but, nevertheless of very good quality and of baroque style. He was at the end of the Broad street and in the decade of the 50-60 of the past 20th century it disappeared for unknown reasons, nowadays we can find a copy of the same one approximately in the same place.  Once finished the new hermitage, it returned to take the height of the small virgin, who was in the church of the Parish, since it was long ago in the old hermitage.

We cannot assure if this small place of prayer had some Confraternity, what if we can say with certainty that former during the 26th, July 27, 28 it took place a great verbena and holidays that were occupying the whole Ancha street, where they were putting on positions of buns, nougat, sweets, drinks and dances with bandurrias and guitars.

Nowadays and for a few years this verbena is celebrated, before with mass outdoors in front of the hermitage followed of a procession with the Holy one by the neighborhood. 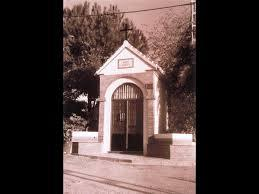