The Tower of the Nuns is a tower built in the 18th century in baroque style, is the only one that stays of the former Convent of the Dominicans of the Consolation. The tower is a work of the teacher Francisco Ambrosio de León.

It is located on a corner of Carrera Baja and Fernan-Nunez road, next to the establishment of the municipal Civil Guard station and ambulatory. 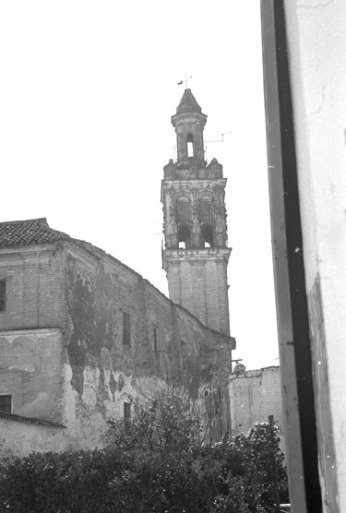 As for the history of the former convent of the consolidation, the church tower remains, now a solitary tower dating from 1757 (XVIII) It is a recreation baroque model of the Giralda. It has a square base and binoculars slender brick columns and bells of the same material, open pairs of arcs, mediating between them a series of finely worked pillars, with other geometric character confer special richness and decoration of the tower, one of the most original of the province Córdoba.

The tower is the work of master builder Francisco Ambrosio de León, who also built the Town Hall.

In the old place where the convent was, there is a small fountain and there are arches with columns, this was the cloister of the convent of the Dominican Sisters of Consolation who are nuns with great economic power.

Legend has it that after the construction of the tower, on top of the tower they put a weather vane of a man who looked down to tell his father if he was right and he got a dizzyness. The man fell of the tower and died.

Every year, many traditional customs or village festivals are held there, among them the Cross on May 3. It is also a final destination of the Wacky Races in September, besides at this place throughout the Easter there are numerous processions (March / April), and the Three Kings day (in January) or the Carnival parade (in February).